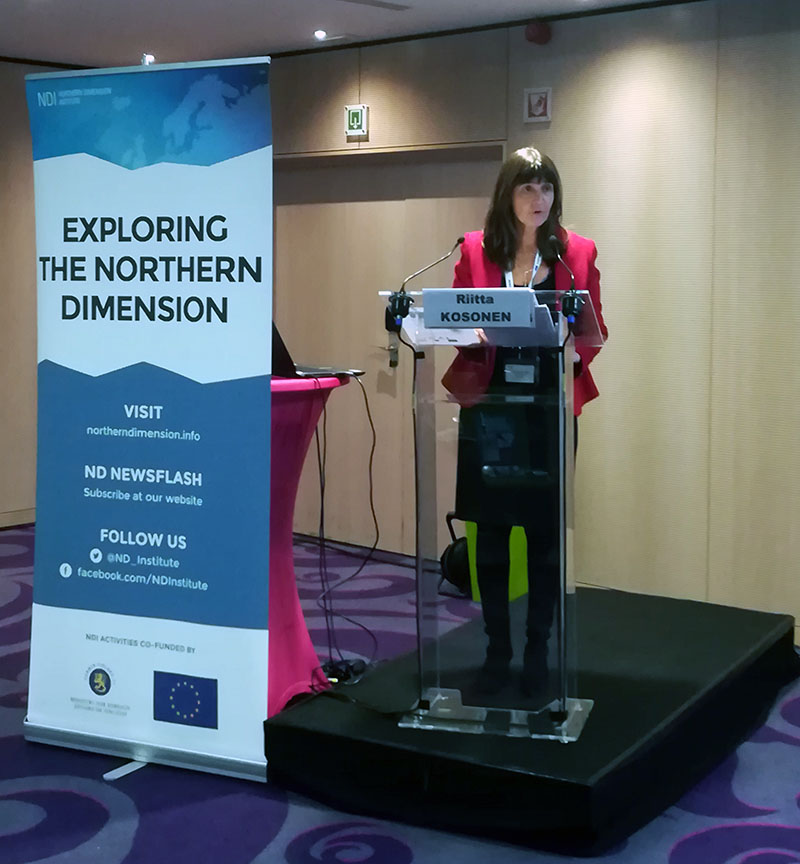 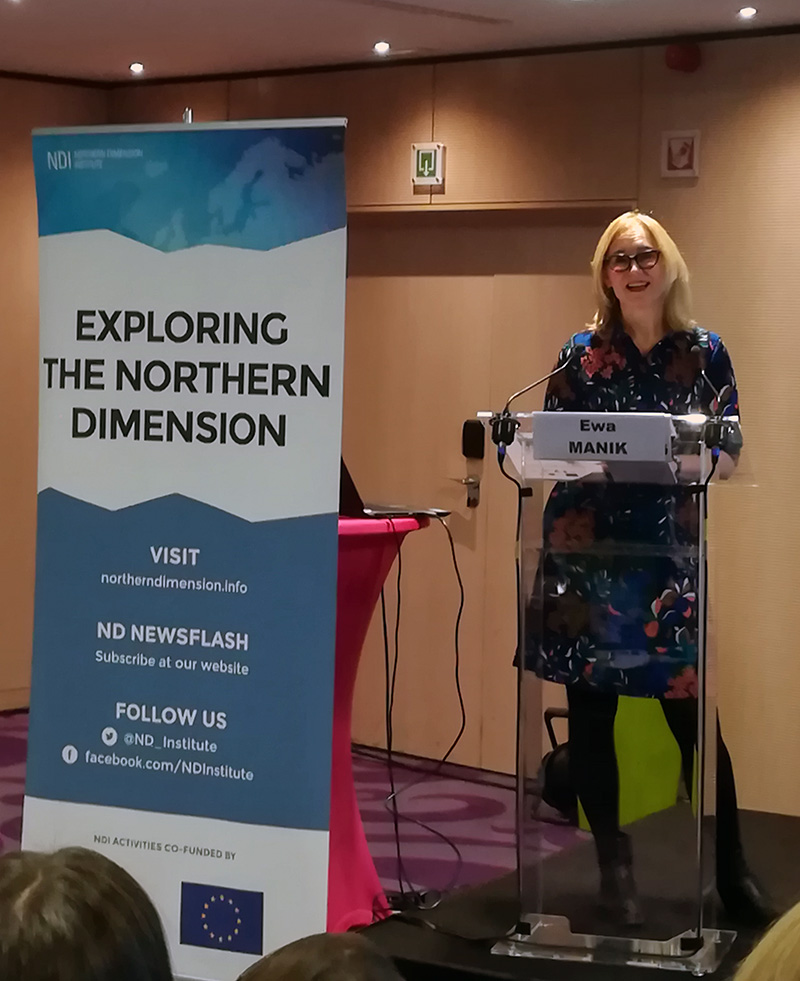 In her keynote speech, Ms. Yvon Slingenberg, Director of the DG Climate Action of the European Commission, underlined multilateral rules-based collaboration and diplomacy as key approaches to engage all the stakeholders in achieving the Paris Agreement long-term goals. EU fights climate change through both domestic actions and international cooperation aiming at ambitious goals on energy efficiency, transforming the industry, net-zero greenhouse gas emissions, cleaner and more sustainable transport, cities and communities. EU envisages environmental cooperation with Russia in the G20 framework, through concrete climate action projects and people-to-people cooperation such as the Northern Dimension initiatives.

In the Knowledge Arena 1, researchers focused on highlighting the policy arenas for reducing black carbon. Professor Mikael Hildén, Director of the Climate Change Research Programme in the Finnish Environment Institute and Program Director of the Strategic Research Program on a Climate-Neutral and Resource-Scarce Finland, Academy of Finland, introduced the Arctic Council actions in reducing black carbon emission. In case the good experiences and innovations are replicated efficiently, the recommended collective goal of 25 – 33 % reduction by 2025 is achievable. Ms. Seita Romppanen from UEF Law School University of Eastern Finland featured the legal dimensions of reducing black carbon emissions. National Emissions Ceiling Directive is so far the only EU legal instrument addressing directly black carbon emissions. In order to ensure proper legal regulation on black carbon, better policy coordination, synergies and specific measures are needed at both EU and global level. In his presentation, Mr. Russel Shearer, representing Arctic Monitoring and Assessment Programme (AMAP) of the Arctic Council, highlighted the EU Action on black carbon in the Arctic. In his presentation Mr. Shardul Agrawala, Head of the Environment and Economy Integration Division, OECD, focused on economic consequences of outdoor air pollution. Based on the OECD estimations, health impacts and costs of inaction to reduce the black carbon are significant in the Arctic with premature deaths as the most dangerous consequences.

In the moderated discussion, the commentators Ms. Marie-Anne Coninsx, Ambassador at Large for Arctic Affairs of the EU and Ms. Susanne Lindahl from DG Environment underlined that the challenge is to bridge the available knowledge and implementation of the needed actions. There is still need for better coordination of the legal regulation addressing black carbon, adopting new technologies into use, applying measurements, monitoring and concrete actions.

In the Knowledge Arena 2, speakers focused on actions in practice. In his presentation, Associate Professor, Veli-Pekka Tynkkynen from the Aleksanteri Institute of the University of Helsinki and Strategic Research Program on Security, Academy of Finland, indicated that reducing gas flaring of the Russian oil and gas industry has critical role in curbing black carbon emission in the Arctic. He underlined e.g. environmental certificates and more reliance on soft means to influence environmental investments and international cooperation in the renewable energy. Ms. Patti Bruns, from the Arctic Council, Executive Secretary for the Working Groups of Arctic Contaminant Action Program (ACAP) and Emergency Prevention Preparedness and Response (EPPR) gave on overview of practical actions and lessons learnt in reducing environmental risks and prevent pollution of the Arctic environment. These include for example an Arctic Black Carbon Case Studies Platform and concrete actions on community based black carbon and public health assessments. Cases studies are a «one stop shop» for best practices and lessons learned from black carbon demonstration projects from across the Arctic region. Ms. Soffia Gudmundsdottir, from the Arctic Council, the Protection of the Arctic Marine Environment working group (PAME), introduced the key achievements and projects underway including the first comprehensive Arctic shipping activity database. Mr. Jaakko Henttonen, Special Adviser on the Arctic Environment for the Ministry for Foreign Affairs of Finland, underlined the NDEP as a successful platform bringing together the key stakeholders to discuss and find concrete solutions in environmental projects in North-West Russia.

The Knowledge Arena 2 ended with a moderated discussion with the commentators. Ms. Stine Svarva, Counsellor for Environment, Mission of Norway to EU pointed out that reducing black carbon emissions are high in the agenda in Norway. Mr. Jari Vilen, Senior Advisor for Arctic Policy, European Commission, emphasized need for urgent measures globally and ensuring that the Arctic is included in the EU mainstream policy. Mr. Dennis Moskalenko from the Ministry for Foreign Affairs of Russia commented that the challenges and interests are common for all the countries and the Northern Dimension framework provides a good platform for sharing new ideas and finding joint solutions in reducing black carbon also in the future.

Mr. Alistair Clark, Managing Director, Environment & Sustainability, EBRD, NDEP, underlined that the joint projects under the NDEP consist of true partnerships between financial partners, donors, countries and local stakeholders, and are easily scalable for other partnerships. 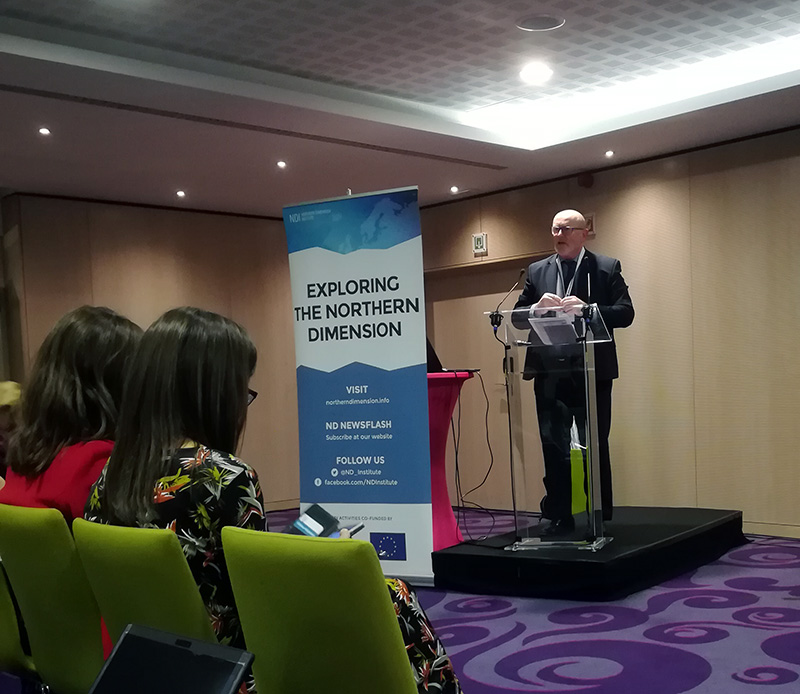 According to the concluding remarks by Ms. Sannamaaria Vanamo (Deputy Director General, Department for Russia, Eastern Europe and Central Asia, Ministry for Foreign Affairs of Finland) the forum proved that collaboration, direct discussions and people-to-people communication between decision-makers, civil servants and researchers are important and particularly in the politically challenging situation today. ND partnerships provide an excellent opportunity for the equal footing partners EU, Russia, Norway and Iceland to make a difference and clean the air together. 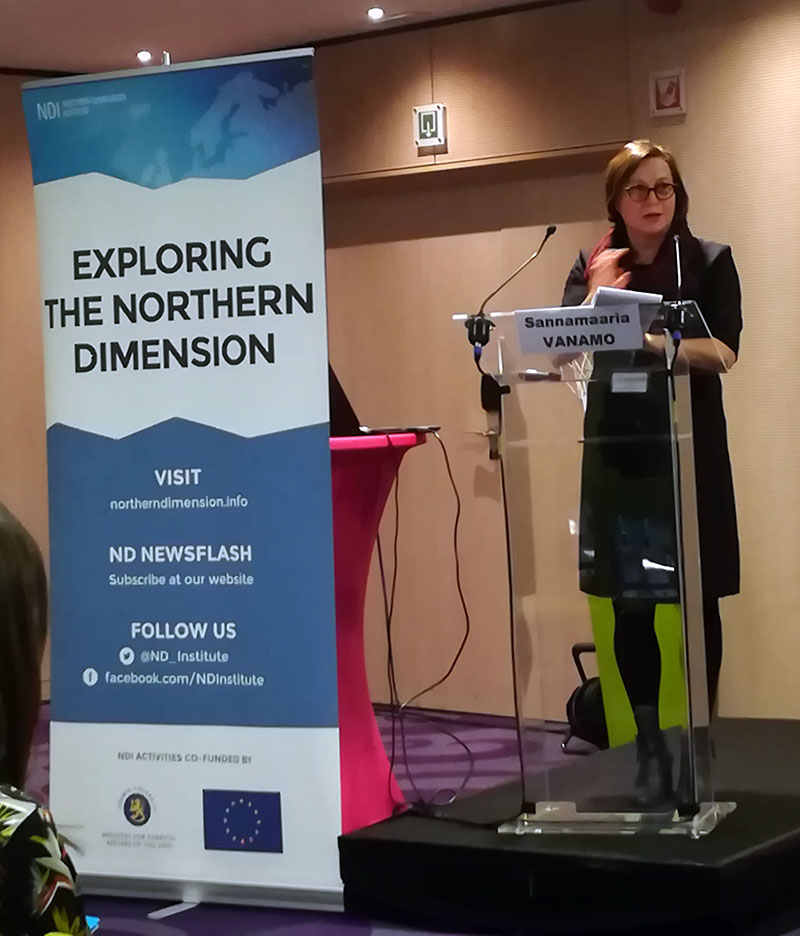 Programme of the event can be found here (pdf).

Presentations made in the forum are available below (pdfs).