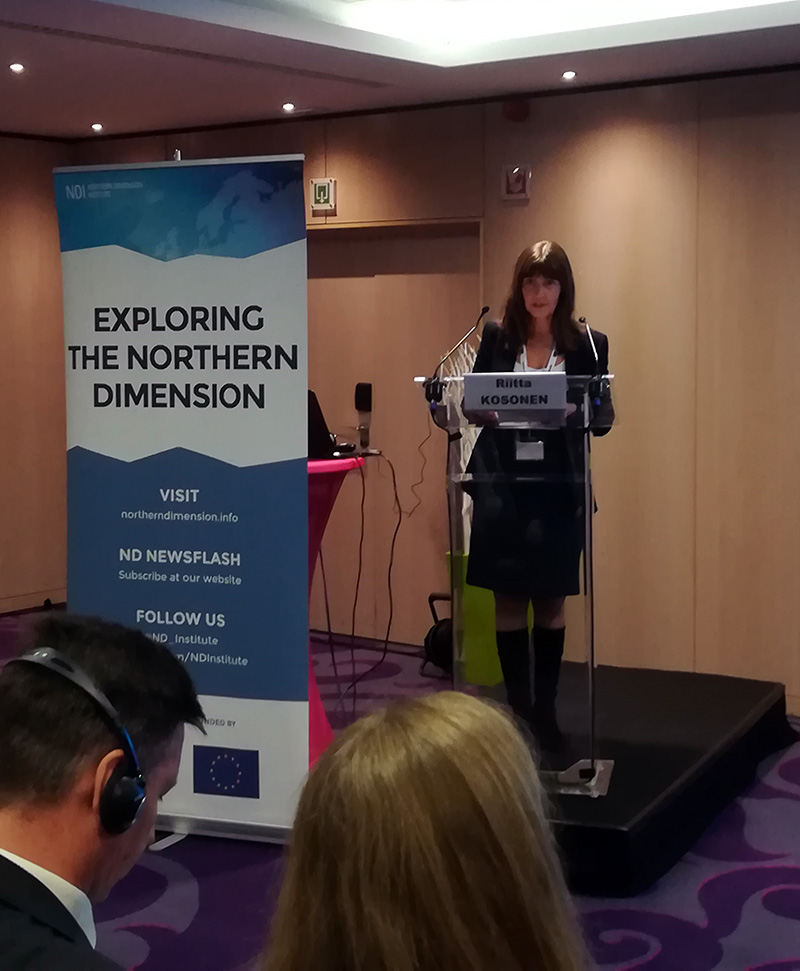 The Northern Dimension Institute (NDI) organized the Northern Dimension Future Forum on Transport: Emerging trade routes between Europe and Asia – Impacts of China’s Belt and Road Initiative on Northern Europe on 20 November 2018 in Brussels. The event gathered over 60 participants, researchers, decision-makers and leading transport companies to discuss the future developments in land and Arctic maritime connections between Europe and Asia. The event featured two knowledge arenas of brief researcher presentations followed by comments and a moderated discussion. Ms. Cathy Smith from Speak-Easy moderated the event.

In his welcoming words, Mr. Oddgeir Danielsen, Director of the Northern Dimension Partnership on Transport and Logistics (NDPTL) underlined the need for evidence-based knowledge and better understanding of the opportunities, which the new trade routes between Europe and Asia can offer. In his presentation Mr. Danielsen showed a picture that gave something to think about. According to Mr. Danielsen, within that circle (highlighted in the picture below) is living more people than outside the circle and that is one reason why Belt and Route iniative has gained so much interest. 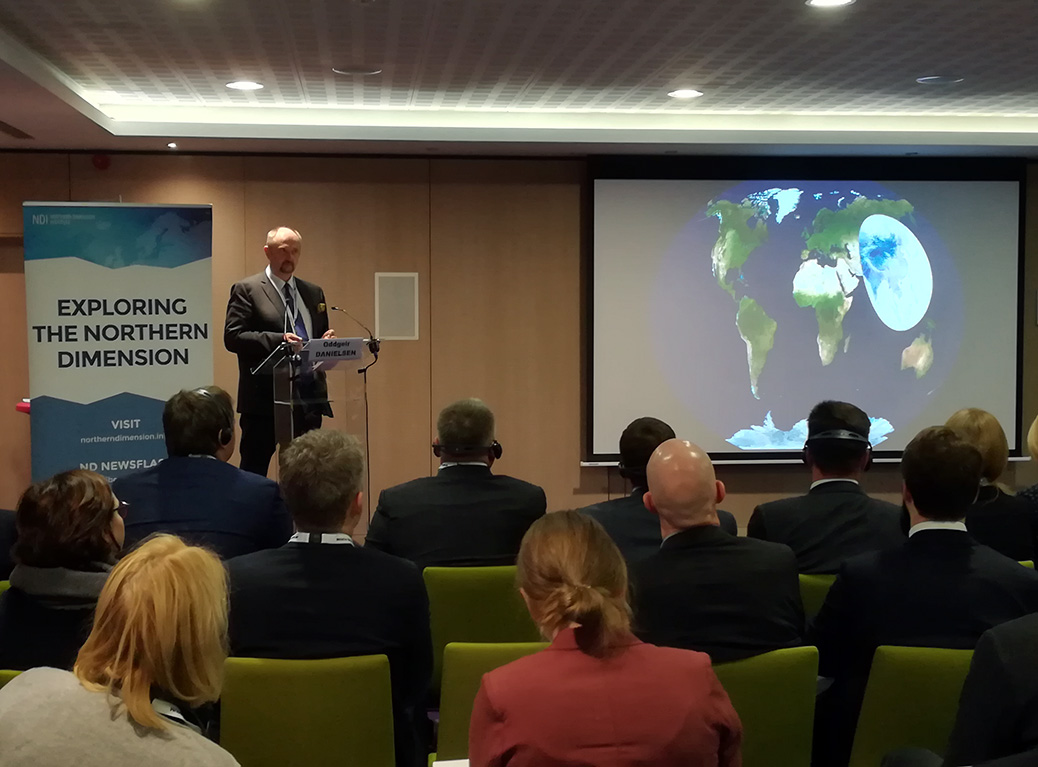 Mr. Gunnar Wiegand, Managing Director for Asia and Pacific, European External Action Service, European Commission, gave an overview of the EU approach to the potential and challenges of the emerging trade routes between Europe and Asia. In line with the newly launched Euro-Asian connectivity strategy, EU enhances multilateralism, sustainable, comprehensive, long-term and rules-based connectivity to ensure safety and prosperity for societies in Europe and Asia, China and India. EU strongly supports strengthening synergies, transparency and level playing field for companies and the key stakeholders in building cross-border connections and transport, energy, digital and human networks, also with Russia. 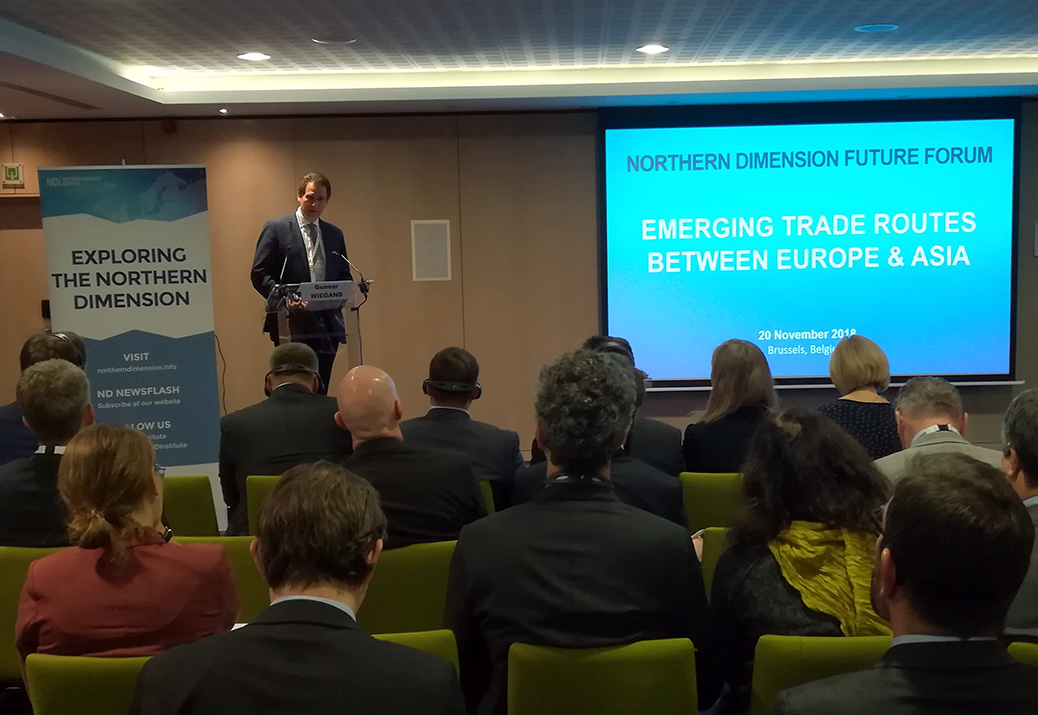 Mr. Maxim Ilyukhin, Deputy Head of the Division of the International Cooperation Department, Ministry of Transport of the Russian Federation, introduced developments underway of the Euro-Asian transport links. The ongoing infrastructure developments aim at modernizing and expanding the mainland infrastructure and interconnection of regions, improving safety, sustainability and reliability in sea, railway and roads by 2024. Capacity and security of seaports are enhanced with transport of containers reduced to seven days. In total, 13 main railway routes are working in between Europe and Asia. Russian satellite system is utilized in developing digital system with additional services for transport, fully automated measurement and data collection system. Russia is open for constructive dialogue and the NDPTL Roadmap would provide possibilities to develop further the international collaboration in transport. 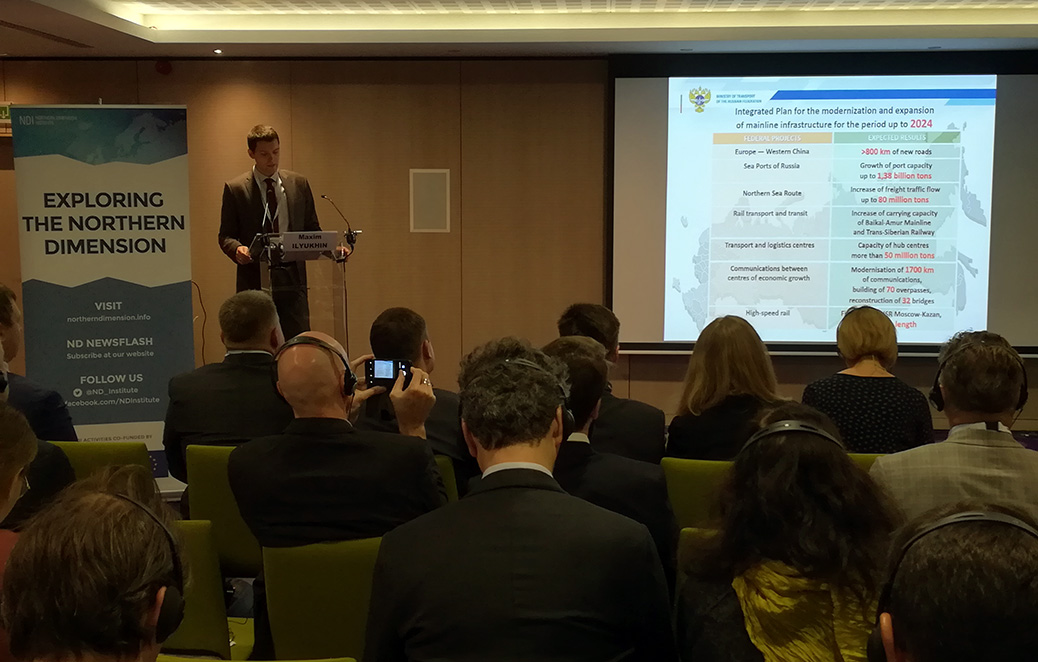 In the moderated discussion, commentators, Mr. Risto Murto, Development Manager from the Finnish Transport Agency and Ms. Merja Kyllönen, Member of European Parliament, pointed out that increasing trade volumes and infrastructure developments increase interest in railroad transport between Europe and China. This creates needs for new services, better knowledge and information, inclusion of all the key stakeholders in further developments.

In the Knowledge Arena 2, the speakers focused on highlighting Arctic Maritime Connections. Associate Professor Bjørn Gunnarsson from the Centre for High North Logistics (CHNL) at Nord University Business School, Bodø, Norway, introduced ship traffic analysis on the Northern Sea Route (NSR) until 2017 and developments in the transport and logistics system. Project Manager Piia Heliste from the Aalto University gave an outlook to the business views about the shipping in the NSR. According to the companies and experts, key incentives for using the NSR are connected to the time and fuel savings. Future role of the NSR as an international transit route depends on factors such as natural conditions, infrastructure developments, additional costs of the Arctic shipping, and the overall unpredictability of the route.

Mr. Leonid Irlitsa, captain of nuclear icebreaker of the Rosatomflot, introduced developments of the Russian atomic icebreaking fleet for support of Arctic navigation. General Manager Mr. Carsten Andersen from the Nordic Bulk Carriers A/S, Denmark highlighted experiences from the NSR as one of the first companies to open the NSR for commercial purposes on dry cargo vessels since 2010. Mr. Hafsteinn Helgason, Business Development and R&D Director from the EFLA Consulting Engineers, Iceland, introduced the Finnafjord public-private-partnership project in large transport infrastructure development in Iceland.

In the moderated discussion, Ms. Marie-Anne Coninsx, Ambassador at Large for Arctic Affairs of the European Union, underlined the increasing economic interests in the Arctic. This has impact on global shipping industry as well as political relations with Russia and China. The challenge in the Arctic is to balance between the economic possibilities and environmental sustainability. Ms. Magda Kopczynska, Director, DG for Mobility and Transport, pointed out that the IMO International Code for Ships Operating in Polar Waters (Polar Code) provides legal framework for international collaboration to ensure sustainability in the Arctic shipping. According to Ms. Tone Cecilia Lang, Councellor, Mission of Norway to the European Union, 80 % of the Arctic shipping passes Norwegian waters. In the maritime strategies, Norway prioritizes maritime safety and rescue services as well as environmental sustainability.

Programme of the event can be found here (pdf).

Presentations made in the forum are available below (pdfs).