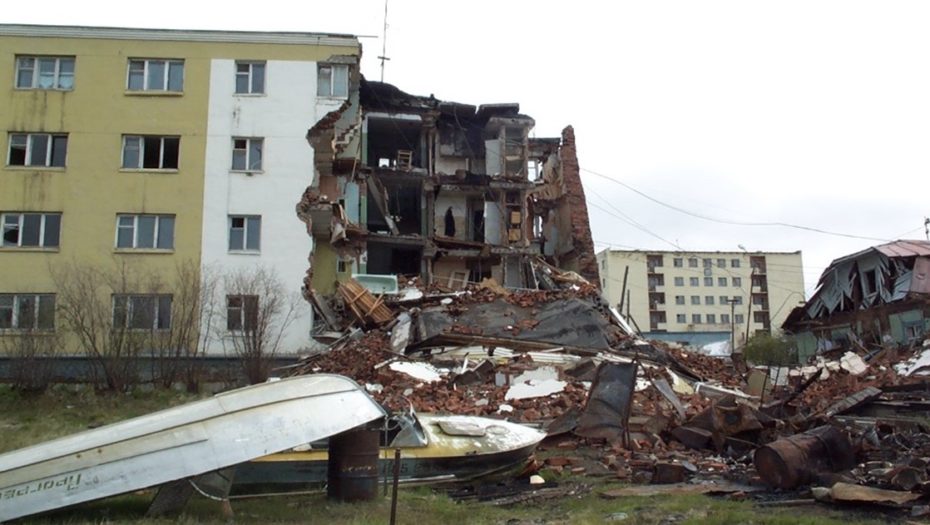 This briefing note presents practical evidence on the impact of climate change on the Arctic zone of the Russian Federation. The large-scale consequences of global warming are manifested in dangerous climatic phenomena and irreversible natural processes, which is confirmed by statistical data, as well as in the occurrence of many incidents, accidents and catastrophes. Immediate and rapid actions are urgently needed to reduce greenhouse gas emissions in order to prevent further irreversible environmental damage and reduce risks to humanity.

The average rate of warming in Russia is more than 2.5 times higher than globally, being 0.51°C per decade since the beginning of the observations [1]. In the Arctic, the average temperature growth rate reaches 0.8 °C in the corresponding period [2]. This has substantial effects on the people, nature and infrastructure in the Arctic:

Human health: Decrease in temperature-related mortality, but an increasing risk of infectious diseases. New diseases such as tick-borne encephalitis, malaria and anthrax may enter the Arctic.
Flora: Tundra greening [3], increase in plant productivity and forests moving northward. High summer temperatures increase the risk of wildfires, and the risk of spreading pests and diseases of the forest.
Fauna: Risk of population decline for Arctic species such as polar bear, walrus or reindeer[4]. Seals may disappear from the White Sea.
Infrastructure: Growing problems of roads and river crossings, especially in winter, problems of buildings and structures on melting permafrost, and increasing coastal erosion [4].
The Northern Sea Route: Decrease of ice cover [3], but in the eastern part of the Russian Arctic the possibilities of ice-free navigation will grow very slowly.

Indigenous peoples were among the first to experience the impact of the climate change, as their culture and lifestyle are closely linked to their environment and natural resources. During periods of winter warming, accompanied by heavy rains with snow, pastures are covered with ice, and deer die of hunger. The largest recorded deer fatality happened in 2013-2014, when about 61 thousand deer belonging to nomadic Nenets reindeer herders died on the Yamal Peninsula [5].

June and July 2016 turned out to be abnormally hot for the Yamal-Nenets Autonomous Okrug of Russia. This natural anomaly became one of the possible causes of the outbreak of anthrax infection. As a result of this epidemic outbreak, 96 reindeer herders and their family members were hospitalized. The diagnosis was confirmed for 24 people and one child died [6]. During this period 2,572 deer were found dead. The burning of deer carcasses and the local disinfection of the territory made it possible to prevent the further spread of infection.

Climate change in the Russian Arctic has an impact on the composition of flora and fauna, and on the distribution areas of species and their migration routes among other things. Typical Arctic species respond to warming similarly in different regions with population decline. The ermine (Mustela erminea) is a vivid example of this process. From 2008 to 2013, number of ermine in the Murmansk Region declined from 10.3 thousand specimen to 6 thousand (approximately 40%), and in the Yamalo-Nenets Autonomous District from 60 thousand to 23.4 thousand (more than 2.5 times). This may be due to two major factors: (a) the decline of lemmings population, which is the main food source of ermine, (b) and the change in habitat connected with climate warming, namely the transformation of the snow regime [7].

Extreme forest fires in 2020 in the north of Russia coincided with an unprecedented warm air temperature [2] and extreme loss of snow in the region. Satellites recorded a fire that broke out about 50 kilometers south of the Arctic Ocean, making it the northernmost ever discovered. Mark Parrington, a senior researcher studying fires at the European Center for Medium-term Weather Forecasts, noted that in June 2020, the highest level of carbon dioxide emissions from Siberian fires in the entire history of observations was recorded.

Another clear evidence of climate warming is the melting of permafrost and the increasing risks of dangerous cryogenic phenomena. In recent decades, the number of destroyed buildings and structures located on permafrost has increased. Over the past 30 years, more than 300 buildings have been seriously damaged in Yakutsk due to the subsidence of frozen grounds. From 1990 to 1999, the number of structures damaged due to uneven subsidence of foundations increased by 42% in city of Norilsk, by 61% in city of Yakutsk, and by 90% in Amderma village compared to the previous decade [8].

Approximately 30% of the pan-Arctic infrastructure and 45% of hydrocarbon production fields in the Russian Arctic are located in areas where ground instability during the thaw can cause serious damage to the built environment [9].

In May 2020, a large-scale diesel fuel spill occurred at CHP-3, owned by Norilsk Nickel. More than 20 thousand tons of petroleum products got into the soil and water. As a result, about 15 thousand tons of hydrocarbons got into the Daldykan and Ambarnaya rivers, and another 6 thousand tons – into the ground. A federal emergency regime was declared in the region [10]. Melting of permafrost was mentioned as one of the possible causes of the accident.

Due to thawing and degradation of permafrost soils in the oil fields of the Western Siberia, an average of about 7,400 accidents occur per year, including about 1,900 in the Khanty-Mansi Autonomous Okrug [9].

To conclude, numerous direct, indirect and inverse links between the climatic, socio-economic and ecological systems of the Arctic cause the multidimensional effects of climate change and significant risks for human economic activity in the Arctic zone. To reduce these risks, it is necessary to ensure that the management and economic decisions on the development of Arctic territories take into account monitoring data and the results of scientific research and forecasts. And of course we should strengthen joint efforts to lower the pace of climate change at the global scale.