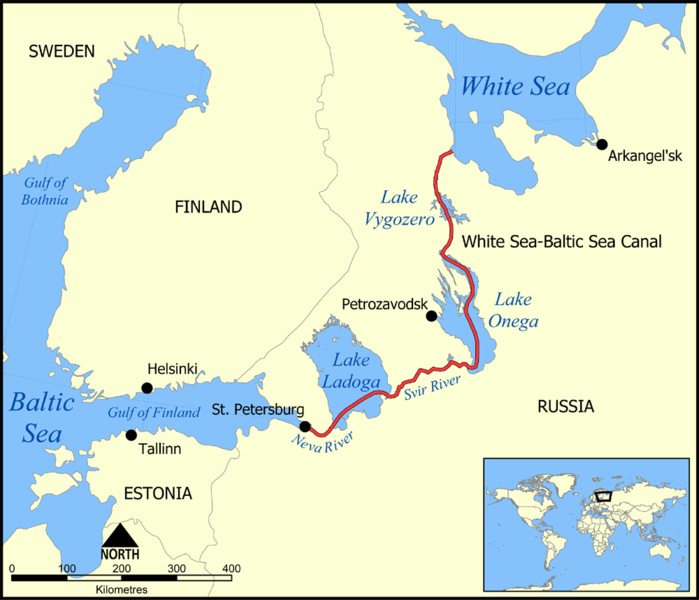 The White Sea-Baltic Canal, constructed in 1931-1933 as a large-scale Soviet infrastructure project and therefore commonly referred to as the “Stalin’s Canal” [1], often evokes negative connotations due to its history. The Canal itself connects Lake Onega to the White Sea, but it also provides access from the White Sea to the Baltic Sea and to the Volga-Baltic Waterway via Neva and Svir rivers and Lake Ladoga (Fig. 1) [2]. Therefore, the Canal is an integral part of the waterway infrastructure in the Northern Dimension area, and provides one option to connect Baltic Sea ports to the White Sea and further to the Northern Sea Route.

Fig. 1 The location of the White Sea-Baltic Canal

The White Sea–Baltic Canal route is 227 kilometers long and it runs from the village of Povenets on Lake Onega to the city of Belomorsk on the White Sea. Its infrastructure is considered sophisticated even according to contemporary standards, as the channel with an average depth of 5 meters includes more than 100 complex hydraulic structures including 15 weirs, 19 locks, 49 dams, 12 waterways, and other devices. Today, the canal is the largest hydro-technical and transport facility and part of the unified deep-water system of the European part of Russia. The infrastructure of the White Sea-Baltic Canal was improved between 1976 and 1983, including the reconstruction of 13 lock chambers on a rocky foundation, rebuilding of 27 out of 38 bays (hydraulic retaining wall or flyover), and replacing 7 pairs of riveted sluice gates with all-welded gates [3].

The traffic on the White Sea-Baltic Canal has increased significantly in recent years, both as to freight traffic and passenger traffic (Fig. 2) [5]:

Fig. 2 Growth in the volume of freight and tourist traffic along the White Sea-Baltic Canal 2018-2019

Recently, the development of the White Sea-Baltic Canal has been taken on the agenda of the authorities of the Republic of Karelia, the Russian region on the territory of which the Canal runs. This is due to the tourism potential of cultural heritage in Northwest Russia, including the tourist route to the Solovetsky Islands that passes through the Canal, and to the increased freight traffic on the Northern Sea Route that the Canal is linked to.

Furthermore, the text of the Economic Program of Karelia includes the development of tourist routes in the following directions, jointly with the Finnish side:

The infrastructure for these routes (roads and railways, inland water transport) is planned to be prepared through the modernization of the Canal and the development of the archaeological complex “White Sea Petroglyphs” (application to UNESCO) (Fig. 3) [7] [8]. 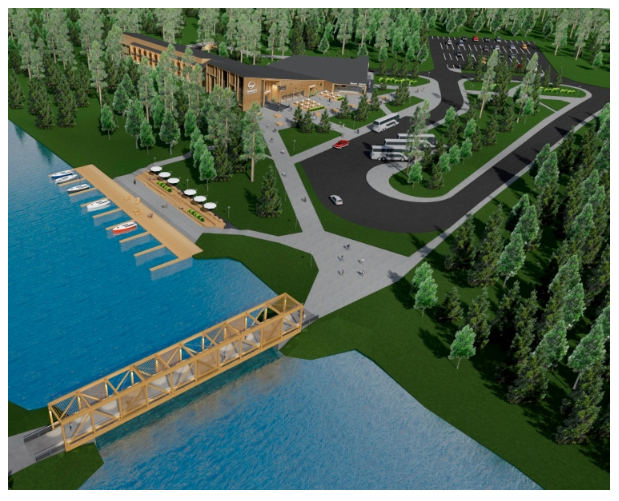 There are, however, some regulatory and infrastructural constraints to the development of international tourism operations on the Canal. Tourist companies operating on the Canal mainly use river passenger ships, which, according to the latest rules of the Russian River Register (RRR) are prohibited from entering the sea. Therefore, tourists are moved to a ferryboat, which raises the question about the use of large cruise ships of foreign companies that exceed the dimensions of the canal [6].

As to the prospects of developing freight traffic on the Canal, the Government of Republic of Karelia proposed in 2019 to make the White Sea-Baltic Canal as part of the Northern Sea route, which would give boost for the development of its infrastructure. Until now, there have been no concrete steps to implement this idea, but the need to improve the transportation and logistics infrastructure on the Northern Sea Route in general has been recognized in the Federal policies of the Russian government. For example, the development of the Northern Sea Route is included as one of the projects in the document “Comprehensive plan for the modernization and expansion of the trunk infrastructure for the period up to 2024” [9] that the Russian Government approved in the fall 2018. More generally, the Plan intends to develop both East-West and North-South transport corridors for the transportation of goods.

In this context, the development of the White-Sea Baltic Canal as part of the transportation infrastructure related to the Northern Sea Route would be justified. This would, however, require a comprehensive assessment of the short-term and long-term economic potential of the White Sea-Baltic Canal. This assessment should address issues such as the capacity of the Canal port to receive large-tonnage vessels , which have been identified as bottlenecks for the development of transportation activities on the Canal.