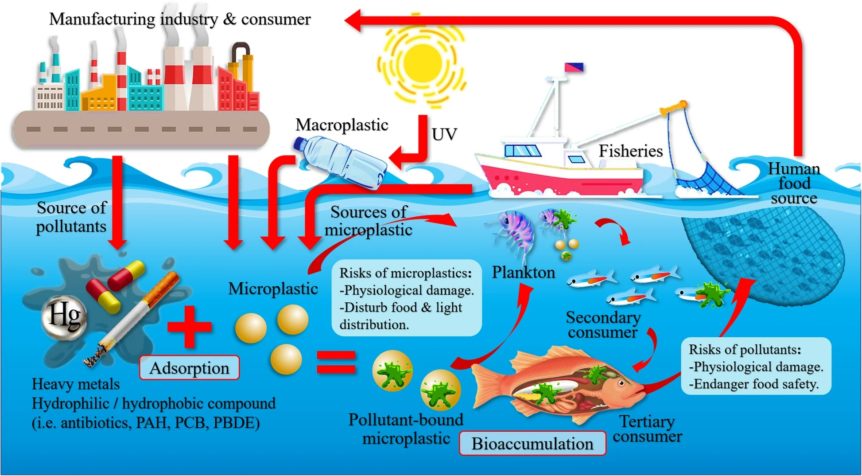 Microplastic (MP) pollution has become a problem that challenges the modern environmental science. The complex nature and behavior of the marine ecosystem causes high uncertainties for the qualitative and quantitative assessment of microplastic pollution of the marine environment. The absence of standard and accredited protocols of microplastic analysis in water and biota lead to significantly different results obtained in the same sampling areas and therefore bias the estimated microplastic pollution levels and the consequent policy decisions.

Existing studies show an increasing amount of microplastic in the Arctic marine ecosystem and suggest that the Arctic is becoming a dead end for marine plastic litter – as it has already happened for the Pacific Ocean. However, there is still lack of reliable research data for the Arctic Ocean and especially Russian part of the Arctic Ocean, which may lead to the underestimation of the MP pollution problem. This in turn makes it difficult to assess its the negative consequences, such as how changes in marine biota reproductivity and health affect the economic sustainability of fishing industries.

The above-mentioned factors demonstrate an urgent need for raising awareness about the MP pollution of the Arctic marine ecosystem, and for further research that contributes to the development of standard protocols of MP analysis and expands the coverage of research sites within the Arctic. A standard protocol for the analysis of microplastic in water and biota would help in identifying and assessing the hot spots of plastic pollution in the Arctic marine ecosystem.

The development of the protocol should be approached as a co-creation effort, which includes collaboration among research laboratories and other institutions, and engages citizens to the MP sampling and hot-spot identification. This would not only to decrease costs of fieldwork, but also educates citizens of Arctic communities in environmental issues and in the responsible use of plastics.

MICROPLASTIC POLLUTION IN THE ARCTIC OCEAN IS INCREASING

Plastic is nowadays one of the most important and frequently used materials in industries and in households. The annual global demand for plastics in 2011 amounted to 245 million tons and it is constantly increasing [1]. Therefore, plastic pollution is increasing as only 8.8% of total plastic waste in the world is recycled [2]. The growing amount of plastic waste leads to increasing microplastic pollution. Microplastics are plastic particles less than 5 mm in diameter, and they end up in the environment through ultraviolet radiation, water, mechanical and other types of degradation of plastic items.

It is well known that the most plastic waste is produced in industrialized regions. The Arctic is not such a region, but the amount of fishing and other industrial activities in the Arctic is also increasing. In addition, a significant amount of plastic pollution is brought to the Arctic with the ocean currents, due to which the Arctic finally becomes a dead end for this pollution [3]. Therefore, the amount of microplastic found in Arctic seas is at the sample level near to that of the shores of industrially developed countries and regions.

Microplastics affects negatively living organisms in the ocean. It can cause physical harm and disrupt the body of marine biota, and cause their death by suffocation or ingestion of plastics. At the same time, plastics are able to accumulate persistent organic pollutants on their surface, which can poison marine animals, causing harm to the marine biota and bioaccumulate in the food web [4].

A STANDARDIZED METHODOLOGY FOR MP POLLUTION ASSESSMENT IS NEEDED

There are many standard protocols developed for the analysis of emerging pollutants in different environmental samples. Such methods are widely used and commonly accepted, and therefore allow the scientific community to assess the quality of new results. MP pollution research is a relatively new field, and there is not yet such a standard method for MP analysis. The assessment of MP pollution in water and biota is currently carried out by a large number of different methodologies and protocols. For this reason, it is difficult to compare the data obtained even in relatively close geographical areas by different scientific groups [6]. Problems arise first, due to the different solvents used for sample preparations. In some cases, researchers use strong acids or other solvents which can damage or fully destroy some plastic particles. Another common problem is the insufficient amount of water or biota samples collected, which can bias the original concentration of plastic particles both in water (particles per m3) and biota (particles per kg or individual specie). Finally, positive and negative control in some studies is made improperly, which increases the possibility of losses of MP during sample collection and preparation, or overestimation due to the external pollution of samples from the laboratory equipment or cloth.

The lack of standard procedure can eventually lead to misguided policy decisions, when these decisions are based on inaccurate data or over/underestimations of the extent of environmental pollution. The development of the standard procedure calls for global collaboration of the leading laboratories in the field of microplastic analysis, and needs to be based on the existing knowledge for sample preparation and analysis. At the same time, Arctic is a specific region and the knowledge obtained there can thus contribute to the development of the standardized method for MP pollution assessment. This would, however, require more financial support for the collection and analysis of samples, and the development of the methodologies by environmental scientists.

ARCTIC CITIZENS ARE A VALUABLE RESOURCE FOR MP POLLUTION ASSESSMENT

Arctic is a specific region of our planet. Due to its harsh conditions it continues to be less populated than most of the other regions, except Antarctica. For this reason, the Arctic could be assumed to be less polluted by plastic litter. On the other hand, several significant ocean currents such as the Golf Stream and Bering strait current deliver plastic litter to the Arctic from the developed regions, and therefore increase the amount of plastic pollution in this region. The sparse population in the Arctic also means that the local scientific community is relatively small, and there are limited human resources to conduct field research in the unpopulated regions of the Arctic. This problem could be partially solved with the help of local population by engaging them to sample collection in currently inaccessible sites. Such cooperation with the local people could become not only a scientific but also an educational project, as it is necessary to instruct the local volunteers to properly collect and conservate samples. This targeted project could be part of wider educational programs in environmental education and responsible use of plastics in the Arctic communities. Such programs together with real work could solve local environmental problems or at least reduce them.

There are already good examples of citizen science for MP sample collection from distant Arctic and sub-Arctic territories, and one of them is illustrated in the Clean North – clean country -project [7]. In this project local students and volunteers collected water samples from distant points of the Arkhangelsk region of Russian Federation, specifically from Severnaya Dvina, Onega and Mezen’ rivers, and also from some small lakes and reveres of the region. In addition to sample collection, the project included lectures to the local population. The project resulted in the first data on the MP pollution of White Sea basin, as it provided scientists the opportunity to obtain samples from distant territories. The data enabled to make conclusions on the MP transfer of plastic in the semi-closed White Sea basin.

This project is an example of a collective effort, where scientist and volunteer organizations worked together and were supported by the local government. Such collaboration could offer a future opportunity to better understand the environmental problems of distant Arctic territories, to teach people careful nature usage, and to solve some local environmental problems.