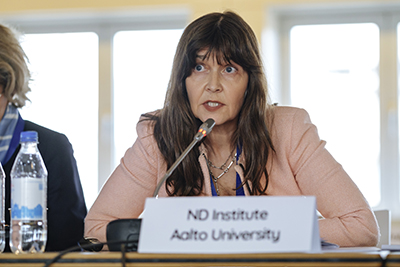 NDI lead coordinator team headed by professor Riitta Kosonen participated in the Northern Dimension Senior Officials’ Meeting (ND SOM) on 5 March 2019. The event was organized by the European External Action Service (EEAS) and chaired by EEAS Managing Director Thomas Mayr Harting in the Square Convention Centre in Brussels. All the key ND participants; ND Partnerships, the Regional Councils, International Financial Institutions as well as other representatives involved in Northern Dimension cooperation were present in the meeting. Belarus, Canada and the USA attended the meeting as observers.

The Senior Officials recognized the benefits and importance of the ND policy and the opportunities for providing a unique multilateral framework and people-to-people contacts to address practical common challenges in the Northern Dimension area. It was also encouraged to further joint work on both Baltic Sea Region and Euro-Arctic matters, using the Northern Dimension partnerships and structures for dialogue, joint projects and scientific cooperation. In her speech, professor Kosonen introduced the work of the Northern Dimension Institute (NDI) since 2016 with special focus on the four ND Future Forums arranged in 2018 and the EC co-funded NDI Think Tank Action launched from the beginning of 2019.

NDI lead coordinator Riitta Kosonen during her speech at the ND Senior Officials’ Meeting in Brussels 2019.