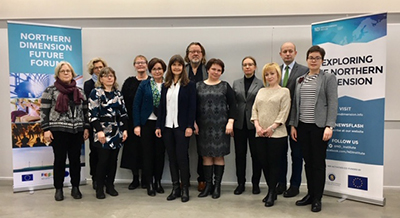 The NDI Think Tank Action was launched in a kick-off meeting at Aalto University on 27 February 2019. This 3-year Action, funded by the EU, serves the information needs of the four Northern Dimension partnerships between the EU, Norway, Iceland and Russia. The themes for these partnerships are environment, cultural cooperation, transport and logistics, and health and social wellbeing. The Action is carried out by NDI (Northern Dimension Institute) which is an international network of universities and research institutes.

In the Action, five Finnish, Russian and Austrian universities and research institutes produce research knowledge on diverse societal challenges of the North. The research topics identified together with the NDI partnerships are how to combat climate change and curb black carbon emissions, how to benefit from creative industries in solving societal challenges, how to facilitate healthy aging, and how to ensure the sustainability of emerging trade routes between Europe and Asia.

The Action creates a culture of resource-informed policy making in the Northern Dimension area, promoting producers and end-users of research to co-create common understanding. This is achieved by active dialogue throughout the research project, which improves the accuracy of research topics and empirical material, and tailors the publication formats and dissemination platforms to be most applicable to the end users.

During 2019, the Action will produce several policy briefs and research reports for the use of ND environmental, culture, health, and transport and logistics partnerships. On the occasion of Finland’s EU Presidency the year will culminate in the ND Future Forum in November. The Forum will be organized by the Action at Aalto University back to back with the Finnish Ministry for Foreign Affairs’ high-level conference on Northern Dimension. The Forum will serve as a platform to collect young people’s visions on the Northern Dimension, and to channel them to the EU decision-makers.