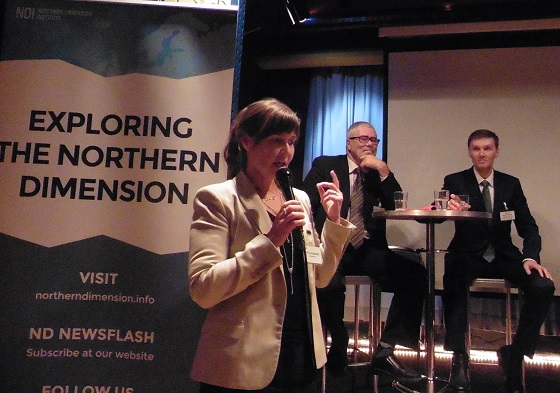 The second Northern Dimension Day took place in Stockholm, Sweden, back‐to‐back with the 7th Strategy Forum of the EU Strategy for the Baltic Sea Region. The ND Day, organized by the Northern Dimension Institute (NDI), focused on envisioning the future in 2030 from the perspectives of the five priority areas of the Northern Dimension cooperation: environment, transport and logistics, public health and social wellbeing, culture and creative industries, and business. The interconnectedness of these areas was clearly evident throughout the discussion.

Professor Riitta Kosonen (Aalto University, NDI lead coordinator) opened the event by sketching the future around three issues that touch all the five ND priority areas: demographic changes, the Baltic Sea and the rise of the Arctic. These issues and their implications were vividly debated in the panel discussion moderated by Monica Zamachowska, a Polish journalist and a European affairs specialist.

Director Marek Maciejowski (ND Partnership in Public Health and Social Well‐being), raised aging as one of the greatest challenges in the ND area: “There will be fewer and fewer people in our region, fewer and fewer are working to support those not working, also socially. People live longer lives than in the past. At the same time all of us want to live good and healthy lives. Who is going to pay for this?” He saw smarter health technologies to provide wonderful opportunities but was concerned about the ability of the societies to react and prepare for the demographic challenges facing the ND area. Both Maciejowski and Pavel Isayev (ND Business Council) highlighted the need of the societies to prepare for digitalization. If people are not willing to accept and adopt new technologies on a large enough scale, the benefits cannot be reaped.

Senior Adviser Ilze Gailite‐Holmberg (ND Partnership on Culture) considered digitalization to be of vital importance also for culture and creative industries as it makes culture more accessible in remote areas. In addition, the creative industries can play a role in improving the design of digital services thus making them more user‐friendly and therefore more acceptable to people.

A positive attitude change was described by Adviser Jaakko Henttonen (ND Environmental Partnership) who was convinced that the environmental condition of the Baltic Sea will continue to improve. The success story and experiences of more efficient wastewater treatment in St. Petersburg are changing wastewater treatment and people’s attitudes throughout Russia. “Local people will make the positive trend continue in 2030”, Henttonen believes. Reaching similar kind of positive development in the Arctic in terms of curbing black carbon emissions is largely a question of willingness – or the lack of it – to do it.

Also Director Oddgeir Danielsen (ND Partnership on Transport and Logistics), expected technological developments, such as automatization and development of more efficient and sustainable sources of fuel, to have positive impacts on the transport sector by 2030 in the ND area. Also the connectivity of the ND area is expected to improve with shipping increasing in the Baltic Sea, the Arctic routes becoming more attractive and e.g. Rail Baltic and potential Arctic rail routes improving North‐South
connections in the future.
Despite recognizing various challenges ahead of us, the panelists were relatively optimistic about the future and shared an understanding of new technologies providing solutions to the problems and challenges that we are threatened by. On the other hand, the technological revolution itself presents a challenge that the societies need to be prepared for.

The event participants included representatives of ministries and embassies, regional development organizations, as well as universities and research institutes from all over the Northern Dimension area. The organization of the ND Day was co‐funded by the European Commission.