Growing trade volumes between Asia and Europe, changes in the goods structure and new localization patterns of industries and businesses in Asia and to some extent even in Europe in combination with strategic infrastructure and operational improvements on Euro-Asian land-routes, in particular by China and Russia, are key causes behind increasing rail freight volumes on the Euro-Asian landbridge. There are two groups of land route options, the Northern Routes, passing on some part over Russian territory, and the Southern Routes, bypassing Russia to the South (partly involving sections with ferry/short-sea-traffic via the Caspian and/or the Black Sea).

For the time being,
*only the Northern Routes are fully functioning for rail traffic between China and Europe and there are reasons to assume that they will stay highly competitive against the Southern Routes even once the latter will have been established in full length, i.a. due to a distance advantage to large parts of China.

*the Southern Routes contain important development perspectives i.a. through the possibility to connect to regions and emerging economies in Southern and South-Eastern Asia currently not linked to the Euro-Asian rail landbridge.

Thus, while a certain route competition certainly may arise, the Northern and Southern Routes are also complementary; their (geographical) market focuses have a certain overlap, but are not identical, and their development should be considered with this perspective in mind.

At the same time, there are still serious challenges of infrastructural, organizational and political nature to overcome, until the Southern Routes will be able to show a performance comparable to those of the Northern Routes.

Together the ongoing improvement of the Northern Routes and the gradual evolution of new Southern Routes can be an important impetus and generate a new momentum for the development of rail freight between Asia and Europe.

The Policy Brief authored by Dr. Gerhard Troche is based on his presentation at the Northern Dimension Future Forum on Transport*. You can download the policy brief here: Euro-Asian land transport links – opportunities for rail (pdf). 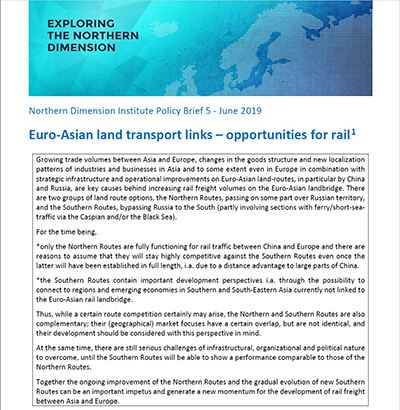 *The Northern Dimension Institute (NDI) organized the Northern Dimension Future Forum on Transport: Emerging trade routes between Europe and Asia – Impacts of China’s Belt and Road Initiative on Northern Europe on 20 November 2018 in Brussels. It brought together top researchers, decision-makers and leading transport companies to discuss the future developments in land and Arctic maritime connections between Europe and Asia.