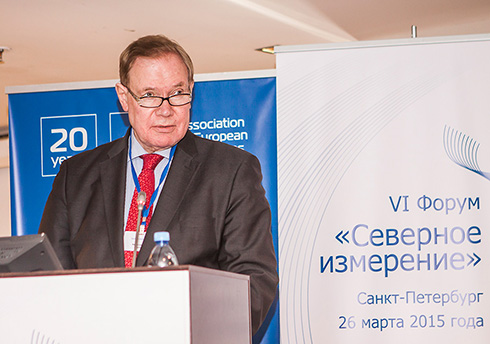 In these times of tension between Russia and Western Europe there is a real success story: the Northern Dimension cooperation. It is an equal Partnership between Russia, European Union, Norway and Iceland, concentrating on projects of common interest in four fields: environment, health, transport and logistics, and culture. For each field there is a Partnership with own specific structures. On the political level, the Foreign Ministers´ biannual meetings are the top decision making body for the Northern Dimension. The Ministerial meeting held two years ago under the chairmanship of Lady Ashton was attended by 14 Foreign Ministers.

In the flagship Northern Dimension Environmental Partnership (NDEP), 1.4 billion euros have been invested in the environmental window, mainly for building waste-water treatment plants in North-Western Russia. Another 1.5 billion euros have been invested in the nuclear window for handling nuclear waste in the region. This has been achieved by minimum bureaucracy, a small EBRD team in St. Petersburg. Most importantly, Russia is the main financier of the projects, with only maximum 20 per cent grant share from NDEP Fund, now at 177 million euros for the environmental window, where Russia is the biggest donor.

The NDEP waste water treatment investment phase is still continuing – some major cities like Kaliningrad, Arkhangelsk and Murmansk still to complete their systems – but has reached its maturity. The positive effects of the new plants on Baltic Sea water quality have already been registered. Many projects, most recently in Belarus, are running until the end of the decade.

The next phase of NDEP cooperation will be energy efficiency, mainly modernizing existing power plants and building new ones in North-Western and other parts of the Russian North. Existing power plants in these regions, numbering in thousands, are polluting the Arctic region with Black Rain, making the polar ice melt. This is a problem of global magnitude. US Secretary of State, Mr. John Kerry, stated during the recent meeting of the Arctic Council in Canada, that Black Rain is a “2000 times bigger melter of Arctic ice than CO₂”.

It is time the Northern Dimension partners decide to continue the NDEP cooperation, due to be phased out in 2017, unless extended by for example 10-20 years. In the EU, we must review and reassess the sanctions hitting NDEP because EBRD and EIB financing for new projects has been laid on ice. NDEP has been real win-win cooperation. If it is seriously thought that Black Rain is a major problem, sanctions should not prevent action to tackle it.
In case sanctions cannot be changed, other ways to finance environmental investment from the EU and other Northern Dimension partners should be worked out, using other cooperation structures in the Northern regions.